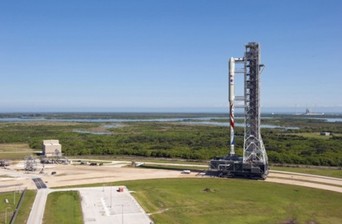 The Liberty design proposal was a combination of hardware from the defunct Ares I project (the Five-segment version of the Space Shuttle Solid Rocket Booster for a first stage) and from the commercial Ariane 5 launcher (the Vulcain cryogenic main engine as a second stage). It was to have been launched from Kennedy Space Center.

If the project had been funded, the first test launch was projected to take place as early as 2013, with astronauts launching by 2015.

Liberty is advertised as a vehicle to service the International Space Station for crew and cargo, but its capacities and cost could make it also a launcher for government and commercial satellites, including to Geostationary transfer orbit.

The Alliant/Astrium proposal was not selected by NASA in the 2011 contract awards to assist development of a commercial space transportation system to replace the Space Shuttle. Development continues in the hope of gaining funding from NASA in future years. NASA and ATK are holding a joint news conference on Tuesday, September 13, 2011 to announce a new agreement that could "accelerate the availability of of U.S. commercial crew transportation capabilities."

On 9/13/2011, USA Today reported NASA's intention to form at agreement with ATK to further develop the Liberty rocket as a heavy launch vehicle capable of launching humans into space. Although no money is expected to change hands as a result of this agreement, NASA will share expertise and technology.